¡Extraordinarios! 10 Houston Latinos who are making a difference

Dr. Laura Murillo is featured in the Houston Chronicle as the top 10 Houston Latinos who are making a difference.

Dr. Laura Murillo grew up in Magnolia Park and has been the president and CEO of the Houston Hispanic Chamber of Commerce since 2007. Under her leadership, the chamber has grown to be one of the most influential among such organizations in the country. 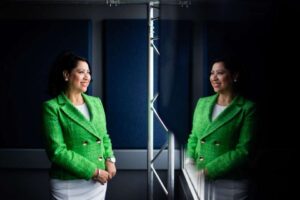 How has your upbringing shaped the way you approach your work?
I feel that coming from the background that I did — with my parents who came here as immigrants having a daughter who’s been named one of the most powerful and influential women in Texas — that nothing has been done on my own. It’s been through the support and encouragement and doors that were opened for me that I’ve been able to obtain that recognition, and hopefully serve as an inspiration to others, Hispanic or not.
Why is it important for Latinos to have a strong foothold in the business world?
We represent 42% of the population and in Houston, our consumer spending is $55 billion. The decision-makers in corporate America benefit from our contributions, not only to society but to the economy. So we are a driving force in the economy in terms of our consumption but also in terms of the workforce that we are providing. While we make many of those contributions, less than 2% of all corporate board seats across the country are filled by Latinos, and I’m here to say that we’re here. We have the experience, we have the education and we represent a large part of the market. Data and research have all shown that performance and revenue increase when you have women and minorities on public boards.
You’ve said you “visualize things not for what they are but what they can be.” What does that vision look like?
We are the model city for diversity, equity and inclusion. People are watching what we do and the choices we make, and the caliber of people who have come here from all over the world and have gone on to be successful, affluent, wealthy, influential and powerful. It is something that is attainable even if you grew up in Houston’s East End, in Magnolia Park, one of the oldest barrios in the city. It is an absolute possibility that if someone like me — who has now had private meetings with eight presidents from across the globe and led a variety of different initiatives — can do it, then it is certainly attainable.
Read the article here: